Then and Now Hampton has always been a diverse, developing city. With over 400 years of history, Hampton has seen a lot of change over the years as it has continued to grow. Take a trip back in time to some of your favorite locations and see how they have changed over the years. See the changes in Buckroe Beach, the Historic Post Office, and Fort Monroe, just to name a few! 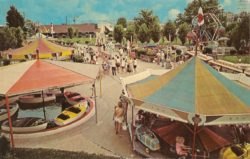 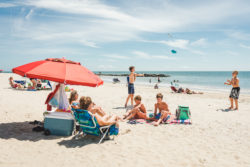 Since the late 1800’s visitors and residents have been enjoying the sites and sounds of Buckroe Beach. While the beach is still filled with eager visitors during the summer, it has seen lots of change over the years.

On June 20, 1897, the Buckroe Beach Amusement Park opened and brought visitors from far and wide for almost 100 years. Today, Buckroe Beach is occupied by soccer and volleyball tournaments, and families taking in the peacefulness of the Chesapeake Bay during the summer. Every morning, you can also find early birds taking in the spectacular sunrise. 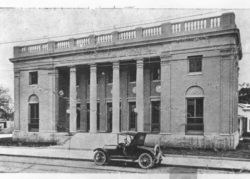 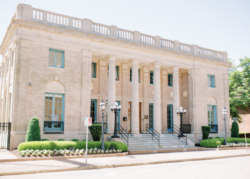 Completed in 1914, The Historic Post Office, located in Downtown Hampton, was designed during the Beaux-Arts architectural period and served for many decades as the largest U.S. Post Office in the area. The impressive building was eventually converted into a restaurant, film studio, and is currently an event venue.

Today, excited brides and grooms plan their dream weddings, and organizations have the perfect venue for their gala or yearly event. Book your event today, and take in this historical venue for yourself. 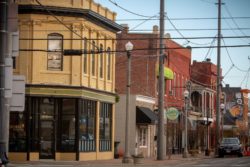 Originally in the Town of Phoebus, the streets bustled with activity throughout the prohibition era and World War II, gaining the nickname Little Chicago. It wasn’t until 1952 that the town was consolidated into the City of Hampton, however, Phoebus has never lost its strong sense of pride and identity.

When visitors venture to Phoebus today, they are in for a treat. Mellen and Mallory streets are occupied by locally-owned restaurants, shops, and friendly faces. It is always busy and ready to welcome you to Hampton in style. 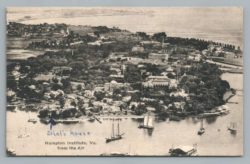 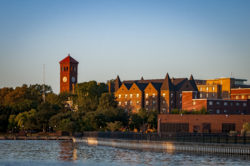 Hampton University has been welcoming students to their campus since 1868 when the school opened as Hampton Normal and Agricultural Institute. Through the years Hampton University accepted students from all over the country, including well-known Booker T. Washington in 1872. The campus is filled with historic spots and buildings like Emancipation Oak, Student Center, and Memorial Chapel.

In 1984 Hampton Institute changed its name to its current name of Hampton University. The Emancipation Oak continues to grow over the campus as a symbol of freedom, as the campus welcomes new students each fall. 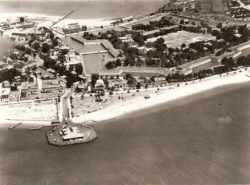 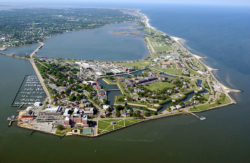 Rich with military history, Fort Monroe is the largest stone fort in America and covers 63 acres. After the Civil War, Fort Monroe was used as a Coast Artillery Training center, playing a large part in World War II. Following WWII, Fort Monroe became headquarters for the US Army’s Training and Doctrine Command. After many years of military service, it was decommissioned as an active army installation on September 15, 2011.

Later that year President Barack Obama named it a National Monument. Still similar to how it looked after its completion in 1834, Fort Monroe has seen lots of change over the years. It has been visited by many presidents, and today welcomes visitors to explore the area at their leisure. 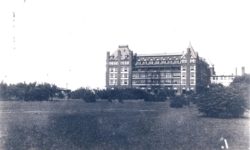 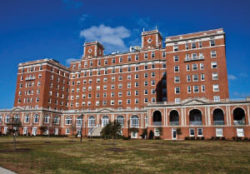 This famous hotel located at Fort Monroe has seen its fair share of changes over the years. The Chamberlin was originally a part of a line of important hotels to sit on this military post. Open to the public in 1822, it welcomed tourists and dignitaries who visited Point Comfort.

The wood frame of this hotel burned to the ground in1920 and was rebuilt in 1928. The Chamberlin continued to operate as a hotel until 2003. Today the hotel operates as a retirement community for the Hampton Roads area. The residents enjoy views of the Chesapeake Bay and daily sunrises and sunsets. 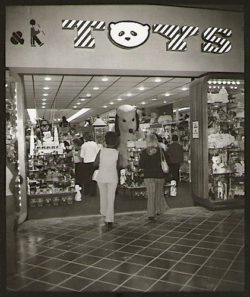 When Coliseum Mall opened on Halloween Day in 1973, it was the largest shopping center on the Virginia Peninsula. This mall was a staple for visitors across the Peninsula to travel to when it came time to shop for something new.

Since 1973, the mall closed in January 2007, and the Peninsula Town Center now occupies the area for visitors to shop when they come to Hampton. 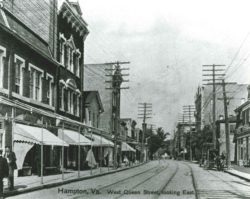 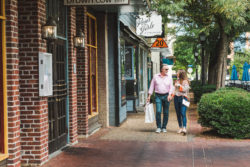 Downtown Hampton has seen lots of change over the years. With multiple fires burning the town to the ground, only a few buildings remain with their original structure.

Queens Way in Downtown Hampton has always been filled with hustle and bustle. Today, the road continues to welcome visitors with an array of restaurants and outdoor dining during the summer.

Thank you to the Hampton History Museum for the throwback photos from their collections. View more of the museum’s photo collection here,
& visit the Museum to learn more about Hampton’s History during your next visit.