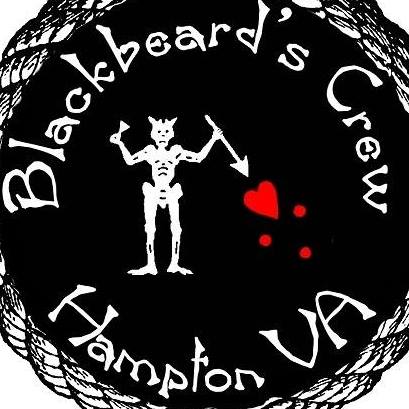 REAL PIRATE RADIO WITH REAL PIRATES! Ham’s Pirate Parlay – July 24, 2021 10AM
Highlighting the city of Hampton’s 400-year legacy as the city “First from the Sea, First to the Stars”, Blackbeard’s Crew aboard their historic sailing ship Adventure and on land at the docks of Hampton will fire cannon shots that will truly be heard around the world and even among the stars above.
Blackbeard’s Crew teaming up with highly skilled licensed amateur radio operators will be establishing contacts with ham radio operators around the world aboard the Adventure while under way in the historic Chesapeake Bay. Cannon shots from the ship as she leaves the Hampton River and passes the shorelines of Fort Monroe, Buckroe Beach and other public areas the vessel may pass will be heard around the world and even among the stars as the two-way radio contacts are established.
Part of the pirate crew will remain dockside monitoring the ship’s progress mixing modern technology with historic living history until the ship returns to the Hampton docks. A piratical ceremony will commence at 10 AM declaring a pirates parlay including a cannon salute honoring the silent key of Johnny E. Rentfro, N5XQK.
The Adventure will then depart the docks at Hampton for her historic voyage reinforcing Hampton’s legacy of truly being “First from the Sea, First to the Stars”. A special event amateur radio call sign of W4R (W4Rrrrrrrrrrrrrr) has been issued specifically for this history making event.